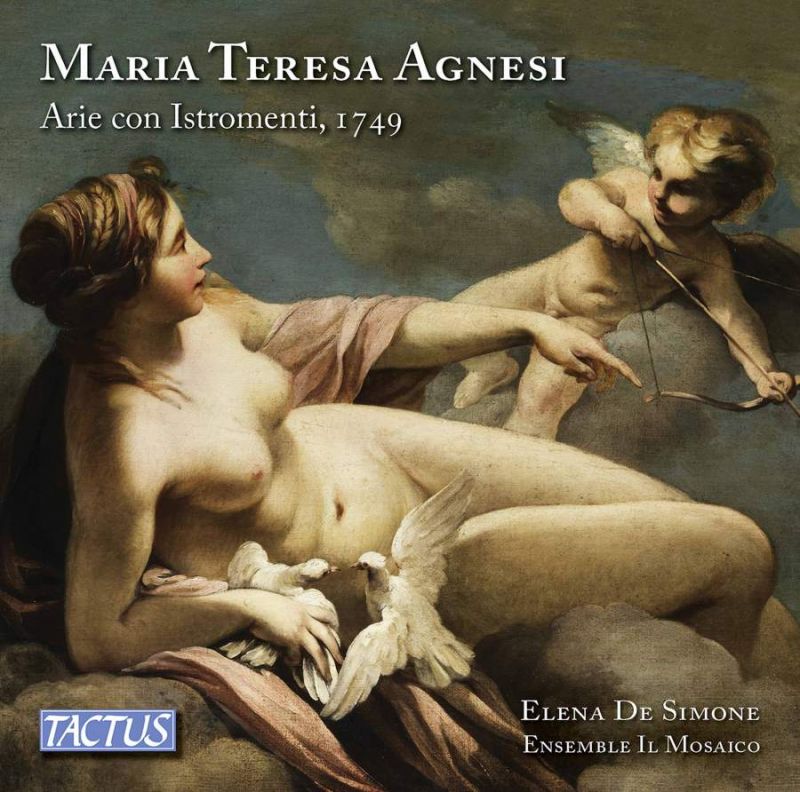 The Italian label Tactus is one of those which often releases discs with repertoire that is entirely unknown, sometimes by composers many music lovers may never have heard of. The disc under review here may be well one of them. However, Maria Teresa Agnesi is not an entirely unknown quantity, as some music from her pen has been recorded before: one of her harpsichord sonatas and a harpsichord concerto are available on disc. Tactus also released a disc with arias from her opera Sofonisba. Although her oeuvre is relatively small, it is rather surprising that she seems to have received little attention, as by all accounts she was a most remarkable woman.

She was born in Milan, and lived there all her life. She showed her musical talents at a young age, but as she was from an aristocratic family, it was impossible to be a professional musician. She performed with her equally talented sister, and as the French author Charles de Brosses heard them, he was very impressed. She was educated at the keyboard, which explains why, at an early age, she played pieces by Rameau, and also composed for the harpsichord. She was also an excellent singer, and this comes to the fore in the various vocal compositions in her oeuvre, among them operas and the collection of arias which is the subject of the present disc.

It was probably due to her aristocratic status that she dedicated her compositions to some of the rulers of her time. In 1747 she composed her opera Sofonisba and sent it to the Austrian Empress Maria Teresa for a possible performance on her nameday. The Arie con Instromenti of 1749 were dedicated to Her Electoral Highness Maria Antonia Walpurgis Symphorosa, spouse to the heir of the throne of Saxony. She sent Maria Teresa a letter, in which she expressed her satisfaction with the arias. She knew what she was talking about, as she was active as a composer herself. "Good taste prevails in them, and the art in them is the more admirable in that it perfectly expresses the natural meaning of the words".

Unfortunately, the latter statement cannot be checked, as this disc's booklet omits the lyrics. At the reverse we find a link to the Tactus site, where the lyrics should be available, but I have not been able to find them. Even if they were available, they would probably be without English translations, which would make them hard to understand by those who don't speak Italian. So I have to assess this disc by the music alone and the performances by the way of singing and playing, without paying attention to the way the text is treated by the composer and by the performers.

The arias are pretty long, and are operatic in character. That does not surprise, as most of them are taken from opera librettos by Pietro Metastasio, the main librettist of the time. Some operas are rather well known, such as Alessandro nell'Indie, Ezio and L'Olimpiade. Obviously, all those arias are in dacapo form. This disc includes nine of the twelve arias from the collection. Two of them are settings of a text whose author is unknown, and it seems possible that Agnesi wrote these texts herself.

The arias are very different in character and mood, which is reflected in the key and musical figures. The liner-notes include short descriptions of the arias. We read, for instance, that "[while] in Son confusa pastorella [Agnesi] highlights a state of disorientation in a dark night by means of quick descending scales played by the string instruments, in Non so, con dolce moto the trembling of a throbbing heart is portrayed with an almost sobbing rhythm." That certainly helps to pay attention to particularly noteworthy features of an aria, but does not compensate for the lack of lyrics. The arias are technically demanding, some of them more than others. One example of a virtuosic aria is Ah non son io che parlo, which includes wide intervals and requires great technical skills.

Elena De Simone was a new name to me, and she certainly has what it takes to bring these arias to life, and to convince the listener of their quality. I have enjoyed her singing, even though I could not read the texts. She does not only convince in the technical department, but also stylistically. Too often I hear singers who have all the technical skills that are needed, but miss the point in stylistic matters. I am happy to say that this is not the case here. I certainly hope to hear more from her. She receives good support from the Ensemble Il Mosaico, which delivers fine performances of the instrumental parts, substantially contributing to the affetti expressed in the various arias.

Despite the lack of lyrics, I have enjoyed this disc. Maria Teresa Agnesi fully deserves the attention she is given here.